A fundraising event to help cancer patients and their families in Sandy Lake raised $5,731 on May 27. Fifteen people, including four children shaved their heads to raise money for Sandy Lake First Nation Cancer Funds. Jillmee Goodman-Wapoose and her fourteen-year old daughter Grace both shaved their heads, something Jillmee says she has wanted to do since she got married in November 2011. At the time, her “best cousin” had lost her mom to cancer. Then when Jillmee found out her grandfather had cancer her daughter agreed to do it with her. Sadly, Jill-mee’s grandfather passed away in April. “We did it in memory of a lot of people who battled with it,” says Jillmee.

In addition to the head shaving, community members at the event participated in “Letting Go”, which saw 100 balloons released into the sky as a way of dealing with the mixed emotions that comes with cancer. Geraldine Meekis organized the balloon event and wrote in a Facebook post that, “Most of us are angry, depressed, confused, dealing with the changes we are facing right now and into the future”. She also wrote, “After letting go we will start looking into the future with trails of positive directions than what we are walking on.”

The SLFN Cancer Funds campaign was started in 2008 by the Sandy Lake First Nation Health Authority. The funds raised help with the cost of things like airfare, accommodations, medication and special dietary needs for cancer patients and their families who have to leave the community for medical treatment. SLFN Health Director Joan Rae says the funds have also been used to purchase things like wigs.

Other fundraising efforts have included bingos, a school hair-dying event, and jello wrestling. Joan says some cancer patients have also donated back to the program. 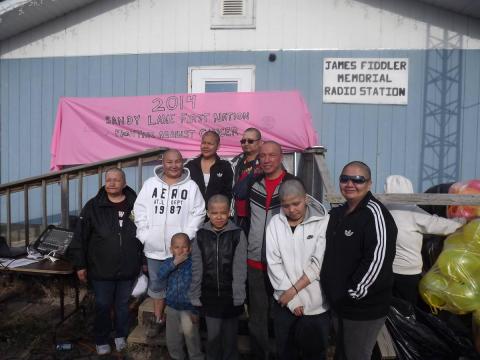