Sandy Lake pulls together to help out after Pikangikum tragedy

SANDY LAKE, ON
Tuesday, April 5, 2016
Sandy Lake pulls together to help out after Pikangikum tragedy
By Willow Fiddler, special for Wawatay News
A First Nations community in Northwestern Ontario is pitching in to help the people of Pikangikum who are reeling over the death of a family of nine killed in a deadly fire last week.
Sandy Lake, a fly-in community with more than 3,000 residents, raised nearly $24,000 in just five hours.
Some of the people in Sandy Lake knew the victims.
The family, including three children, perished in the fire on March 29 in Pikangikum.
The Ojibway community of approximately 2,300 people has been plagued with ongoing crisis for years including epidemics of suicide.
When the news of the multiple fatalities reached Sandy Lake, welfare administrator David B. Fiddler spurred into action.
Fiddler said two of the adults who perished in the house fire last Tuesday night were colleagues working for social assistance in their own community.
“We needed to come together. We can only imagine how hard it must be to lose one of your fellow staff members like that,” Fiddler said.
Fiddler said he reached out to Pikangikum the morning after the deadly fire.
“I said, whatever you guys need just let us know.”
Later that day, five Sandy Lake council members and the chief flew to Pikangikum to offer their support. The community was being referred to as “Ground Zero” to convey the enormous emotional impact that losing three generations of one family has had on the tight-knit residents.
Coun. Fabian Crowe said a lot of community members were waiting at the airport when they arrived and the magnitude of the tragedy that had just occurred was felt as soon as they landed.
“There were people crying already and they just came running to the plane. They wanted support, any kind of support.”
Crowe said that scene played over and over again as planes began arriving that afternoon including from neighboring community Cat Lake First Nation, another carrying several special investigators and another with a victim’s sister and her family from Sandy Lake.
“There was lots of people crying, even the chief. They didn’t even know what to do,” Crowe said.
The council members attended the scene of the house fire. The bodies of all nine family members were still inside. Crowe said the two O.P.P. officers guarding the scene were the only people around.
“People couldn’t even go there because they couldn’t even see the sight. We didn’t see anybody just standing around, just only those two officers. That’s how hard it was for them to go see it.”
Crowe said he can’t describe how it felt to be standing there looking at where a family of nine people lay dead, the youngest victim just eight-months old.
He said at that point, not even the chief of Pikangikum had been to the scene.
“It’s hard for me, just imagine…how he must feel,” said Crowe.
By Thursday morning, Fiddler had heard back from his colleagues in Pikangikum who said they were in need of food. Fiddler said it didn’t take long for people to get moving.
“The response right from the get-go was tremendous,” he said.
A food drive was started and donations were received in the Ontario Works office back in Sandy Lake. Fiddler said groceries, clothing, traditional food and even food that was already prepared to eat was collected over a period of about four hours – enough to fill the back of a pick-up truck.
“That’s just how Sandy Lake is in times like this,” he said.
Fiddler says staff members from the early childhood development office received and packaged all the donations as they came in. A local community member volunteered his truck to take the donations to the plane and another local donor provided the plane transportation to Pikangikum.

At the same time food donations were being coordinated, the local radio station collected cash donations being called in from community members.

Fiddler and Crowe arrived at the radio station just before noon to promote the food drive. By that time, Fiddler said about $2,000 in donations had been pledged by those who called in. When they left an hour later, the amount had multiplied reaching $12,000.

Fiddler said it really picked up when Crowe got a call from local business Adowgamick Enterprises with a $5,000 donation.
”Oh, I could just feel it in my back,” said Crowe. “You just feel it.’”
“We were just getting hot, we had our jackets on and we had to take off our jackets,” said Fiddler of the overwhelming support that was pouring in.
Fiddler said he’s not necessarily surprised at the amount of money and donations that was raised in such a short time.
“Anybody that’s in a group got together and did something. It was coming from everywhere,” Fiddler said of the donations.
The Sandy Lake Riverhawks, the men’s hockey team who just brought home the championship from the Northern Bands Hockey Tournament made a donation of $600 and ladies broomball champions the Blazing Archers donated $500.
“(It’s) something to see,” Crowe said. “I’m glad I’m from Sandy Lake. I could cry but I don’t usually cry easy. That’s how I feel.”
Sandy Lake Coun. John McKay said the chief of Pikangikum was moved to tears when a community member delivered the cheque to him in person on Friday.
“I think the community felt something when they knew we were trying to help them,” he said.
Former chief of Sandy Lake Adam Fiddler offered prayers to Pikangikum in a Facebook post. He recounted his own experience of a fatal house fire during his time as chief when he and a volunteer firefighter crawled into a burning home where they found two bodies. He said he then had to go and inform the family waiting outside.
"Community leaders take on many responsibilities that would never be expected of municipal mayors and councillors.” Fiddler’s post read.
Fiddler made note of the challenges facing First Nation communities like Pikangikum and Sandy Lake including “limited resources, inadequate infrastructure and unsafe, overcrowded homes.”

The chief of Pikangikum, Dean Owen, told CBC in a recent interview that his community has no fire department and most of the community has no running water. He said the only fire truck in the community couldn’t make it to the fire because of poor road conditions.
“Such tragedies are avoidable, and it is critical that our communities are resourced appropriately to address their needs to ensure their health and safety,” said Grand Chief Fiddler.
On Saturday afternoon, the remains of the nine family members were transported to Toronto where they will be examined and identified. Pikangikum Coun. Ken King said he isn’t sure how long it will take to identify each one.
“We really need prayers because there’s a lot of pain right now,” said King.
He said the funerals are going to be especially painful for the families because they won’t get to see their loved ones one last time if the caskets are closed. He said the funerals have not been planned yet.
“It’s going to take a long time to heal, for people to heal.”
King said the community has been receiving a lot of support from surrounding communities, nearby towns, Manitoba and even from the Toronto area.
“It helps a lot,” said King. 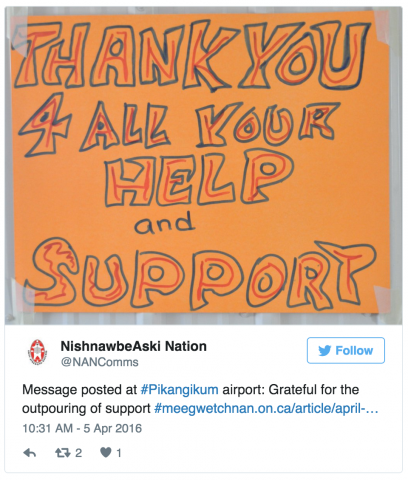